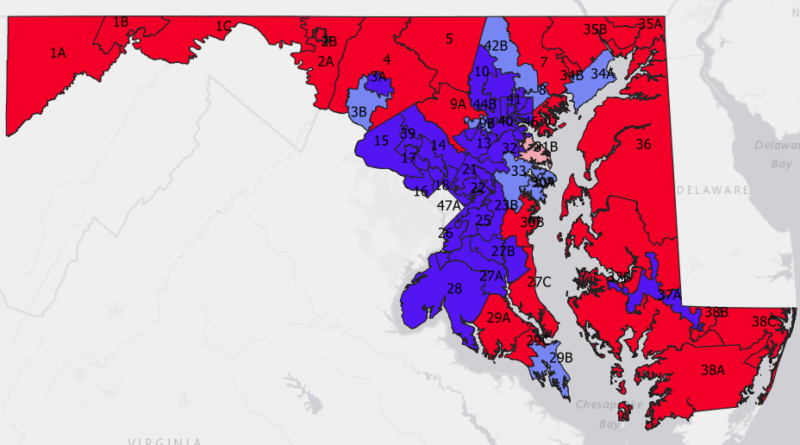 The Blue Wave has arrived in Maryland.

While some Democrats will be disappointed that their candidate for governor lost to a strong incumbent, they certainly have many reasons to celebrate following last month’s elections. Governor Hogan’s “Drive for Five” campaign to break the Democratic supermajority in the State Senate failed spectacularly: Republicans only gained two seats, then lost one, for a net gain of only one seat. Some of the highly-touted Republican senatorial candidates lost by wide margins. In the House of Delegates, Democrats gained eight seats, completely reversing the Republicans’ eight-seat gain from 2014. Democrats technically lost one seat in the House due to Meagan Simonaire’s party switch and retirement from a solid red district.

Democrats also performed well at the local level, winning the Anne Arundel and Howard county executive posts and taking control of the county council in Anne Arundel, Dorchester, and Frederick.

The downside of the Republican “Drive for Five” campaign and all the publicity surrounding it is that its failure became the biggest takeaway of the senatorial elections, rather than the fact that Democrats actually ended up with one less senator. Republican pundits seemed genuinely surprised that Democrats won District 9, which contains southern Carroll and western Howard counties. Nobody should have been surprised that Republicans won District 38 on the lower Eastern Shore and District 42 in northern Baltimore County.

Democrats won big in the House of Delegates, performing especially well in suburban areas on their way to gaining eight seats in the chamber. Democrats technically lost one seat in the House due to Meagan Simonaire’s party switch and retirement from a solid red district.

This district contains a lot of new communities between Montgomery County and the city of Frederick, and has become the home of many federal employees, who tend to favor Democrats. It was only a matter of time before this district turned blue, but most observers thought it would take at least another decade.

This is a three-member district in east-central Baltimore County, containing Overlea, Parkville, and Perry Hall. Prior to this election it was represented by one Democrat and two Republicans, but Democrats have gained an additional seat in a huge upset to Republicans who had high hopes in an area where Larry Hogan is extremely popular. While eastern Baltimore County as a whole has been trending Republican, this part of the county is more affluent and educated, and has been the seat of one of the state’s most active progressive grassroots movements.

In the end, Democrats missed out on a clean sweep of this district by just 570 votes. Joseph Boteler, who previously served as delegate from 2003 until he lost a primary election in 2014, will be returning to the House. Joe Cluster, who had been appointed to a seat here upon the retirement of his father in 2016, came in fifth place and as such will not be returning to the House.

This district is located in Howard County and contains most of Ellicott City and a slice of Columbia. Just about everyone expected this district to turn blue immediately after it was drawn in 2014, but it was won by Republican Bob Flanagan in the Hogan wave. This year was different, and former county councilperson Courtney Watson won this seat as expected. This 15-point win was the largest margin of victory for a Democrat capturing a red seat in the state.

Located in southern St. Mary’s County, this district surprisingly flipped from blue to red in 2014. However, Democrats had a great candidate in Brian Crosby, who defeated first-term Republican Delegate Deb Rey by a wider-than-expected margin.

This Annapolis-based, two-member district has been very blue on paper since it was drawn four years ago, but one seat was retained by Republican Del. Herb McMillan. The seat would have been very hard for Republicans to hold in the current political climate, and McMillan opted to retire. Democrats easily swept both seats this year, and this district probably won’t be competitive in the near future.

In the most surprising development of the year, Democrats picked up one of the three seats in District 33, which has long been seen as a Republican stronghold, as it contains some of central Anne Arundel County’s most affluent neighborhoods such as Arnold, Crofton, Millersville, and Severna Park. However, it seems these types of areas are turning sharply away from the Republican Party of Donald Trump.

This two-member district is located in eastern Harford County, an area that is ancestrally Democratic but appeared to have been turning red in the past decade and a half. It was represented in Annapolis by one Democrat and one Republican, but after this year’s election it will be represented by two Democrats.

This is another affluent, suburban district that was never thought to be competitive until Democrat Michele Guyton won one of the two open seats. If this district is un-gerrymandered after 2020, she may have an easier time winning re-election in a district that will otherwise remain very conservative.

Perhaps not, but 2018 was not simply a reversal of Republicans’ 2014 wins. In fact, Democrats only won back one of the seats they lost in 2014. Rather, the election results point to a possible realignment in Maryland politics. The seats Democrats lost in 2014 were primarily conservative, blue-collar suburban or exurban districts that had been voting Republican at the presidential level for years before they finally elected Republican delegates. The seats they gained this year were primarily in white-collar suburbs, where people of middle and upper-middle income and higher levels of educational attainment have turned against the Republican Party of President Trump. It will be interesting to see if this trend reverses once Trump is out of office, or if it is a more lasting political realignment. We will have to wait until 2022 to see how these trends play out.